COVID-19 Impact: How did the pandemic affect the livestreaming industry?

With humanity experiencing a new period and almost every industry affected severely by a global pandemic, how did live streaming services see a huge surge in their number of users?

As lockdown measures got more and more strict globally, the need for distraction and joy became inevitable. Not surprisingly, this need has been fulfilled with a boom in online shopping, e-learning, and video streaming services. Digital consumption, which was already on the rise before the pandemic, reached its peak of all times.
‍
Streaming platforms like Netflix, Prime Video, and Hulu – just to name a few – have seen the highest subscription numbers in their history and live streaming platforms like Twitch, Youtube Gaming, and Facebook Gaming have boosted their viewers and streamers. However, the change has not undergone only in terms of numbers; consumer habits have been evolving as well. The way we spent our time in front of the screens during this long wait is telling a story about the new era of live streaming platforms that is about to come.

The Era of Livestreaming Platforms

As almost everything transforms while moving to the Internet, new concepts and new ideas have also emerged regarding livestreaming. Video game live streaming was one of those concepts. When we go back to the first half of the 2010s, Twitch was one of the few platforms to watch streamers who mostly played video games with entertaining commentary.

In 2014, Twitch was getting more online traffic than one of USA’s most popular streaming services, HBO Go. This has meant, as the streaming industry grows, platforms for video game live streaming like Twitch are gaining more traction every day.

Amazon realized this traffic and acquired Twitch in 2014 for almost US$1 billion. This actually indicated the platforms’ huge potential. After Amazon, giant tech companies like Facebook, Google, and Microsoft got their own share from the cake by launching video game-based livestreaming platforms one by one. Zuckerberg established Facebook Gaming, Microsoft acquired Mixer, and Google was in the game with YouTube Gaming.
‍
These platforms had been the main attraction for only gaming enthusiasts until recently. However, with COVID-19 pandemic, things started to change. The era of livestreaming brought not only a huge jump on the number of viewers and active channels but also on the variety of live shows and the demographic segmentation of viewers. With this diversity, these platforms turned into spaces to socialize by chatting, cooking, playing live music shows, and attending social party games, especially for Gen Z that has been growing up with the internet.
‍
Anyway, enough with the story part, let’s take a look at some statistics taken from different surveys about livestreaming platforms during this time:

• According to StreamElements and Arsenal.gg’s report, from April 2019 to April 2020, in terms of hours watched by viewers, the overall YoY (year-over-year) growth rate of the livestreaming industry is 99%.
‍
• Twitch, as if it’s reflecting the industry by itself, performed 101% growth annually in hours-watched including gaming, just chatting, live music shows, and other content types in 2020.

• Moreover, MoM (month-over-month) growth rates from March 2020 to April 2020 in the same report reveals that the livestreaming industry had kept growing by the effect of the pandemic with a 45% increase in general.

• Facebook became the champion of this report and period by placing itself in a higher place than other platforms with a huge 238% YoY growth and a 72% MoM growth rate. While Twitch’s rate was 48%, Youtube Gaming’s was 14% MoM. 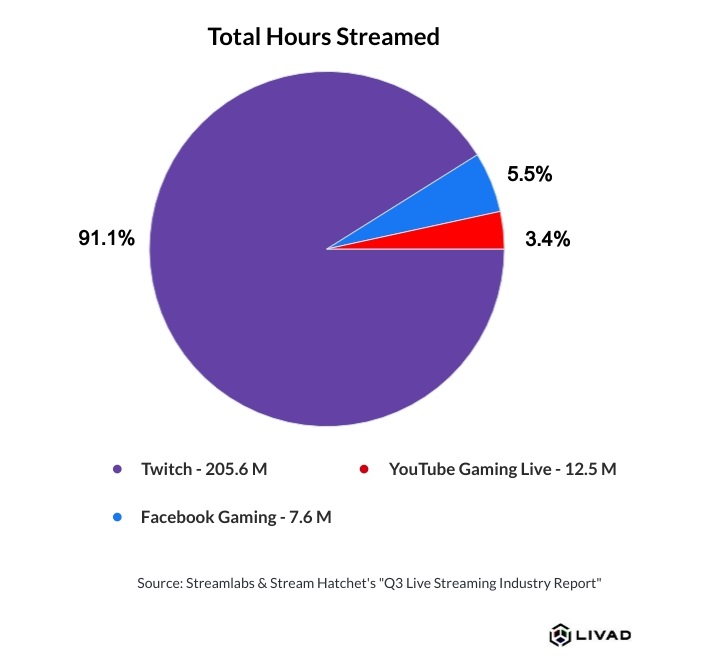 After Mixer’s shutdown in June 2020, Twitch started to hold 91% of total streamed hours across livestreaming platforms with 205.6M hours.

‍The given data including the numbers of April 2020 shows that the first months of lockdown measures caused a significant impact in every number at all platforms. Now, the question is, did these impacts last when the restrictions loosened after April?

Well, the answer is yes. According to Streamelements and Arsenal.gg’s “2020 year-end report”:

• In comparison with 2019 December, Twitch achieved an 83% increase during 2020 in hours watched, from 900M to 1.7B in December 2020. This was the highest number that the platform has ever reached.
‍
• In the same period, Facebook Gaming’s watch hours increased by 166% from 135M to 388M hours. Like Twitch, December 2020 has become a milestone for Facebook Gaming too.
‍ 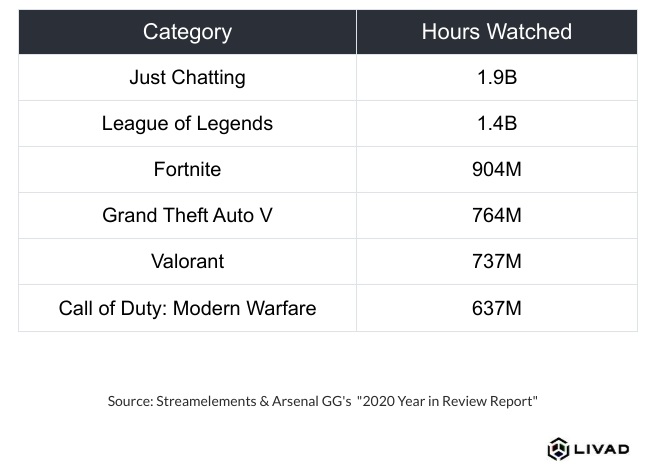 • Just Chatting came to the top of categories for the first time in Twitch history with 1.9B watch hours, confirming our previous point about the variety of the content that is streamed live.
To sum up, livestreaming is one of the few industries that soared during the pandemic. People from different backgrounds preferred to watch streams in their spare time in quarantine, while their consuming habits have been changing. As the data from March 2020 to April 2020 shows, the impact of stay-at-home mandates directly reflected in the numbers of viewers, streamers and the variety of content.

One could have expected that the numbers reached in April 2020 eventually would go back to its state before the pandemic. But here we are, in December 2020, platforms such as Twitch and Facebook Gaming have shown their true potential by demonstrating that the shift caused by the pandemic is here to last.

Last but not least, the variety and popularity in livestreaming have also brought about the necessity of standing out for not only streamers but also brands which found themselves in an increasingly competitive environment.

‍A smart way to be distinct in such an environment is adopting new strategies in livestream advertising. LIVAD’s advertising model promises brands to reach, interact with, and collect feedback from their target audience through compelling ads combined with the power of streamers that are highly influential within their communities.

If you want to stand out in this competitive environment, start leveraging the power of smart Livestream Marketing with LIVAD’s ad display technology, request a demo today.

Looking for a custom solution?
REQUEST A DEMO